After lunch, we divided in two groups to play simultaneously. Three of us played “My sister Malala” (me included) and other four went to the other terrace to play “Mum, I made this sex tape”.

“My sister Malala” is a play designed by Elsa Helin. It’s a free form for only three players. In this game, you will play one of three Pakistan teenagers, who can use the Internet in their schools, and the different lives they live and suffer. For that, each of them has two scenes: a Facebook state and its conversation, and a live-role playing short scene.

We only made two changes to the original design. The first one was beginning the Facebook conversation by an actual written state just below the Facebook page we designed in the workshop (we decided not only to describe the photos, but also to draw them). We think that helps to reenact how a real Facebook post is. After that, we continued the conversation orally, as it is described in the game.

The second change was in the short scenes. According to the designer, all the players together have to decide about how the scene will end. In the Spanish larp culture, that is a very strange concept. We prefer playing the larps without knowing the ending, flowing with the events. So we agreed on adapting it. Before the scene began, the other two players (non-protagonist ones) spoke about how they are playing their characters and how they want to finish it. Therefore, for the main character, the entire scene was a surprise, in the same way that it would have been to the real teenager. And I think that this change worked marvelously.

Overall, I think that the design is very solid. It was amazing the way in which it creates a scale of tension and identification with the different girls. I totally recommend playing it if you can.

Mum, I made this sex tape

The other four girls played “Mum, I made this sex tape”, designed by Susanne Vejdemo. I couldn’t make a complete review of the larp as I hadn’t played it. Nevertheless, they had an amazing time and I hope some of the players will make a review soon and I could attach it here.

After two hard games, we decided to play something more light-hearted. And our choice was “Mentioning the Unmentionables” by Kajsa Greger. It was the funniest game I’ve ever played, especially the first two parts.

As it happened with the other games, as we wanted to play all together, we adapted the game for seven. It wasn’t a problem for the two first games (“Vulvas” and “Dying for a cup of coffee”) but it was for the last one («Just Put Some Salt on It»). When you play the last one with more than five people, it is very long, as you have to replay each scene three times. So, as the games can be played separately, I highly recommend to play the two firsts with more people if you like, but not the third one.

“Vulvas” is an easy game, but it is so much fun. We nearly double the objective number, so we were very happy about it (after, we continue with it all the daylong when we remember a new film). For Spanish speakers that want to made this game, we translated the word “vulva” for “vagina” as the meaning in Spanish is funnier (Spaniards tends to be more open with saying some words as “coño” –c***- and “vulva” is like a high level word for us”).

I’m not going to explain a lot about the other two games, as they need to be played without knowing the twists they have. However, if you need a funny game but, at the same time, with important issues addressed in them, “Mentioning the Unmentionables” has to be your choice. It is time for the women’s anatomy, problems and needs to be spoken by its names.

After them, we went together again and we decided to play “Glizty Nails” designed by Kat Jones. Glitzty Nails explores the relation between women of different social classes, and how their problems are not only different but also they made them fall apart in the fight for rights.

The larp is for 2 or 4 players, but we decided to play it for 6 (3 clients, and 3 workers). Moreover, as we were 7, two of them played as one (one played the emigrant and the other the executive). Even it is not a problem to increase the number of players in pairs (2, 4, 6, 8…), I highly recommend not to play it in impairs. It is more interesting if you can play both roles.

We decided to make other change in the setting. According to the design, you must play it in a table, as they do the manicure in most of western countries. But, based in our experience visiting southeastern countries as Vietnam or Cambodia, we put three armchairs for the clients and we made the manicure in our knees. It increases the feeling of humiliation, the difference between them. It work so well (even all of as have pain in our legs the day after).

For me, this game was one of the better designed in the book. It was well thought, well written, and it was even better when you play it. You could totally feel how a women loses everything when they abandone their countries to find a new life. 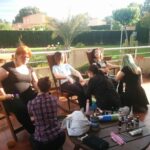 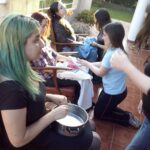 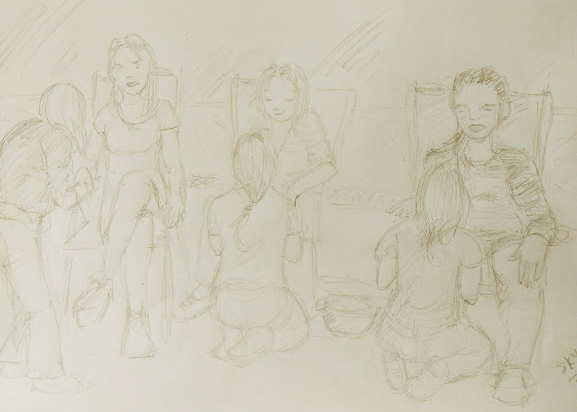 Drawing made by Sky as we were playing Glizty Nails.