OMG! I’m back from Black Friday (International run 1) and I’m so excited about it. As they have declared a embargo of the stories until the end of run 2, I will wait to post this out. But being all the week without saying a world about it in public has been really, really hard.

So… what’s Black Friday? Black Friday is an italian larp, the first full-English one ever done there. It was a translation from the italian runs made in. Here you have the general data of the event: 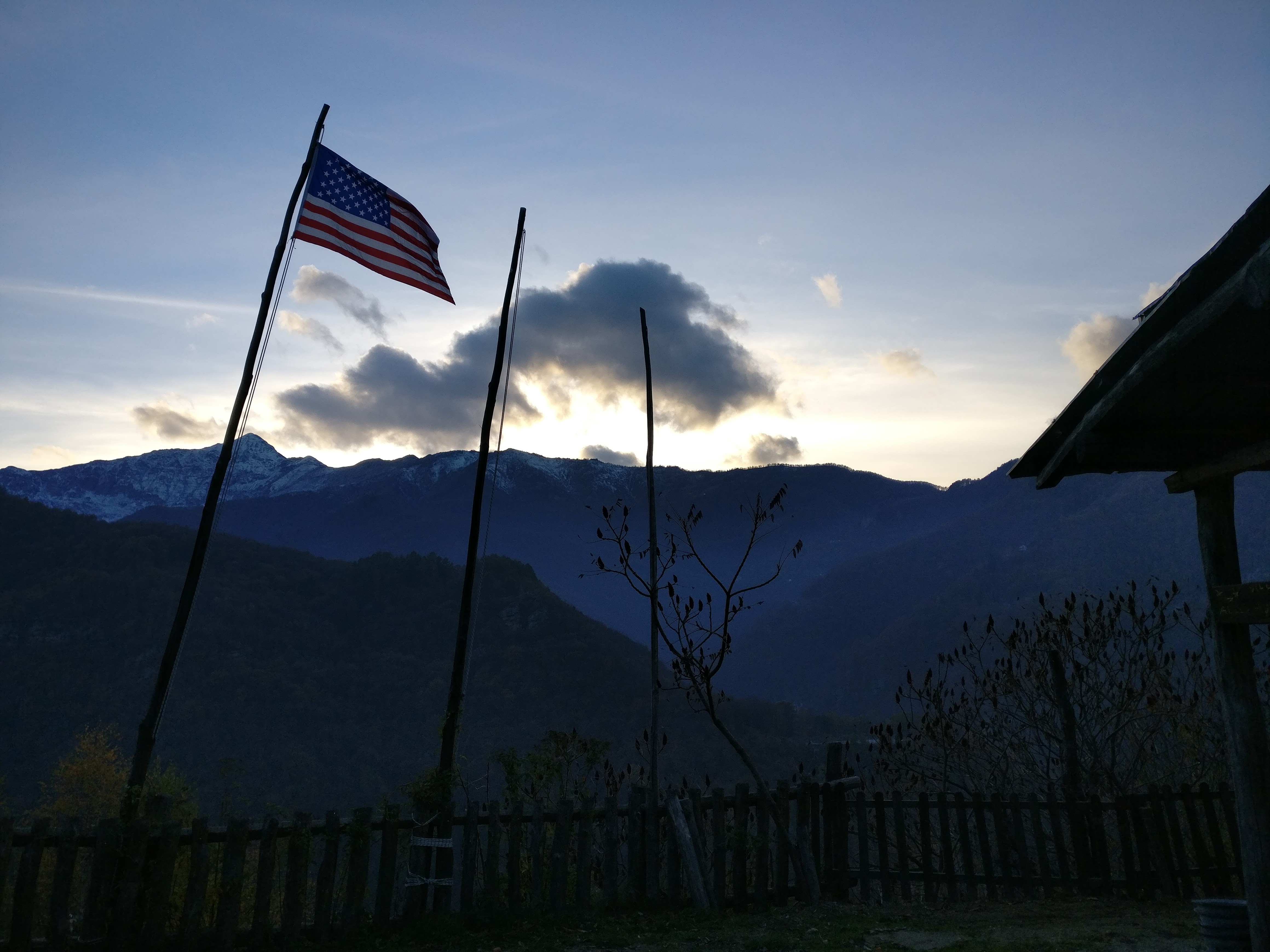 Liberty Town and its amazing settlement. Photo by Cristina Palamini.

Before beginning the larp, the only thing we all knew about the setting was a small piece of information in the webpage: «Black Friday is set in present-day USA. If not in time, we will take you far away in space, to a remote American town, in a modern-day realistic, complex and technologically advanced setting. A setting we want to live and depict with all its contrasts and contradictions.» Finally, it was set in a little village in Wyoming in 2014 (that was really a pity because we couldn’t talk about the recent Trump’s election as president).

The other clue we had about it was the references: «Many aspects of Black Friday closely remind some American tv-shows. The dangerous secrets and conspiracies seen in “Utopia” and “Homeland”, the whirling uncertainty of “Lost”, and some flashes of “X-Files” and “Visitors” too. Add a pinch from “The Twilight Zone” and movies like “Village of The Damned” and “Blindness”.».

And it was as amazing as it seemed from the description or even more. For me, it was living an Utopia chapter all the time, and it was so great! I don’t want to spoil a lot about the larp as I hope they run other international editions in the future (this larp is so amazing that everybody should have a chance to play it).

The experience depended a lot in which group you were into. There were three different which you have to join when buying your tickets: law enforcement (FBI, Delta Force, Swat), scientifics, and town people. I decided to play as a scientific, and I couldn’t have chosen best position for my style of play (more on this below).

The game was played in «The village of the Stars», a rustic hamlet located in Lusernetta (near Turin, Italy). It was in a cool valley, 780 mt. above sea level, in the first slopes of the Alps. The views were really breathtaking.

The village was really beautiful, with its stone houses, a lot of communal spaces to play into, and totally out of «mundane» people. The perfect location for a larp like this. The pity is that I spent mostly all of the playing time inside the lab, that was amazing, but not enjoying the rest of locations.

Even though, I was able to go for an in-game walk at night, and it was a breathtaking experience. The moonlight reflected on the mountain’s snow, drawing the profile of the Alps. For my character, really religious person who enjoyed to be in the mountains because it was God’s creation, was illuminating. For me, it was a memory that will be in my mind for years.

The only real problem with the larp, for me, was the extreme cold of the Alps in November. Even the organisers had communicate that it would be cold, it was more than we expected. Termal underwear was not enough for a southern girl like me to keep warm in the long hours of work in the lab. And in the few hours we went to sleep (I slept three hours each night of game), it was really freezing. The problem is the type of heating that the cabins had, that needed people putting wood in it all the time, and when you’re playing, it’s easy to forget those mundane things. Saturday night, not being in game, we manage to keep the rooms well heated and it was a complete different experience.

For some problems that weren’t from the organisation, the larp busses arrived 1.30 h late to the location. That was a problem as we ended beginning the workshops late. And that made them shorter than we expected.

We began with a short briefing about how to manage the guns (black fire guns), the general rules of the larp and how to do violence (realistic fights). After that, we were separated into different groups and we did some exercises around the team dynamics. For me, it was the best part of the workshops. We had time to learn all our names (we worked in a lab together for some years), and knowing the public information for each player.

I want to really highlight the exercise of «the interrogation» where we can ask the other characters questions about themselves. It was really interesting to know about their political preferences, their believes, their commitment to the company… It gave us a lot of material to use inside the larp.

The other exercise that was really useful was a flashback scene where we ought to play how a coworker ended in the hospital for breaking an emergency protocol. It gave us a lot of thoughts about the theme (that afterwards was essential in the larp) and some common knowledge. To all my co-players: DON’T BE DELGADO, MY FRIENDS!

I would have appreciated the pre-larp workshops to be longer (the last one was cut eithout having time to finish it), and having some post-larp workshops would have been great. A lot of people left with a lot of bleed that could have been managed better. But the organisers choice was doing a great after-party full of Italian food (I don’t regret that part at all xD). 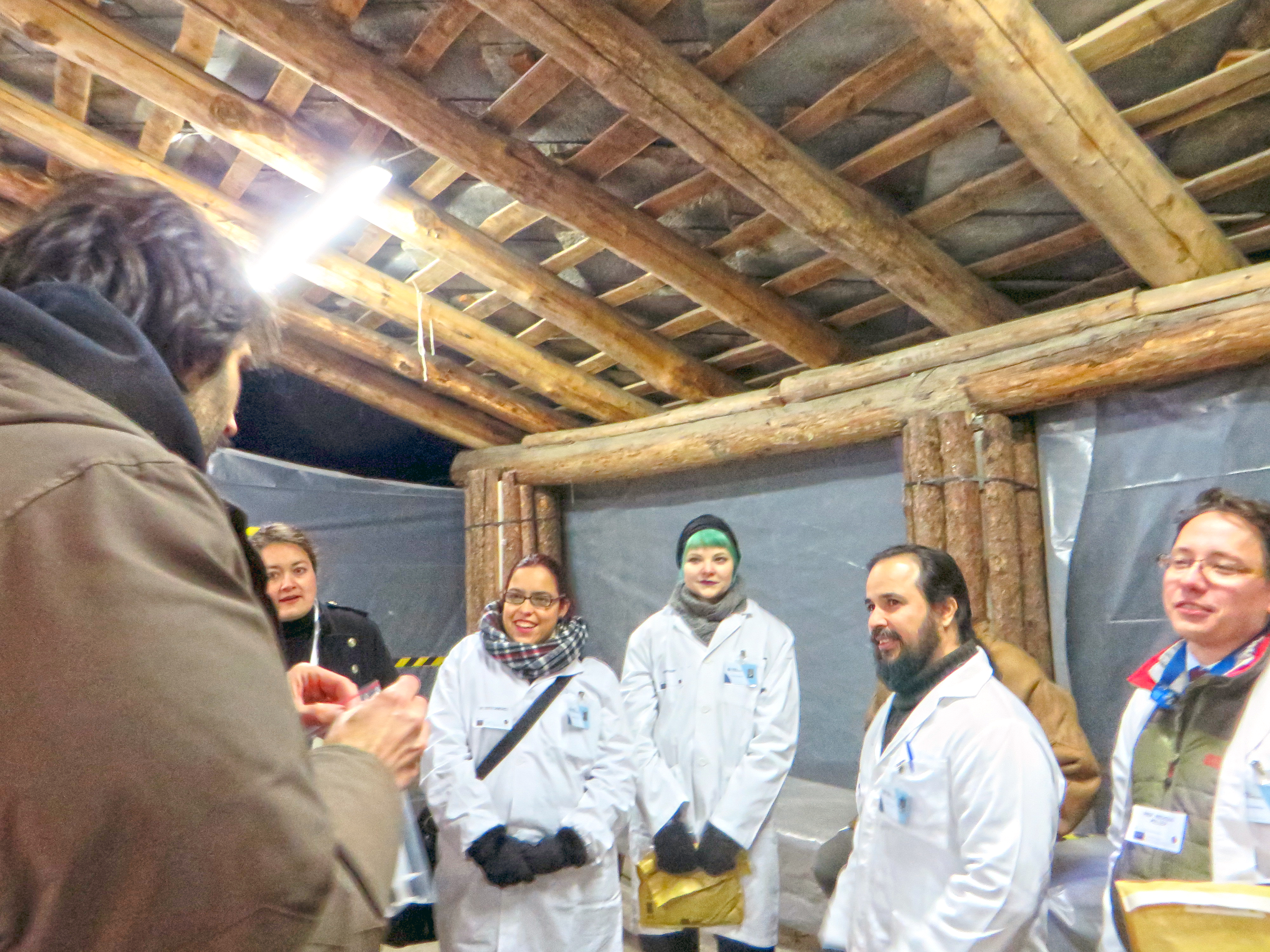 Scientists during the workshops. Photo by Kadri Umbleja.

One of my great objectives going to this larp was experimenting an Italian game for myself. In the last couple of years, south-European larpers have been talking a lot about the existence (or not) of a Mediterranean Larp Scene. What we have clear is that, even if we have been influenced a lot by Nordic Larp Scene, we aren’t the same and we want to keep our traits. There have been manifestos, informal talks and a lot of articles in that.

So having the opportunity of experimenting the Italian style was amazing. That’s the best thing about international larps. We can knew each other and share experiences. We can learn and teach. And that’s amazing.

Black Friday was what I expected in terms of play and style. Characters have secrets that you could discover in game. There was a strong story created by the organisers but you could play your part in it freely. I prefer those kind of larps to sandbox ones!

It was a really similar style to what we do in Producciones Gorgona, in Not Only Larp or even in some of the Somnia’s or Snara’s events. So, my answer is yes, we have a southern style, some treats in common, and we should begin to talk about them. I’m looking forward to play Harem in May so I can also add to this the romanesque French style 🙂 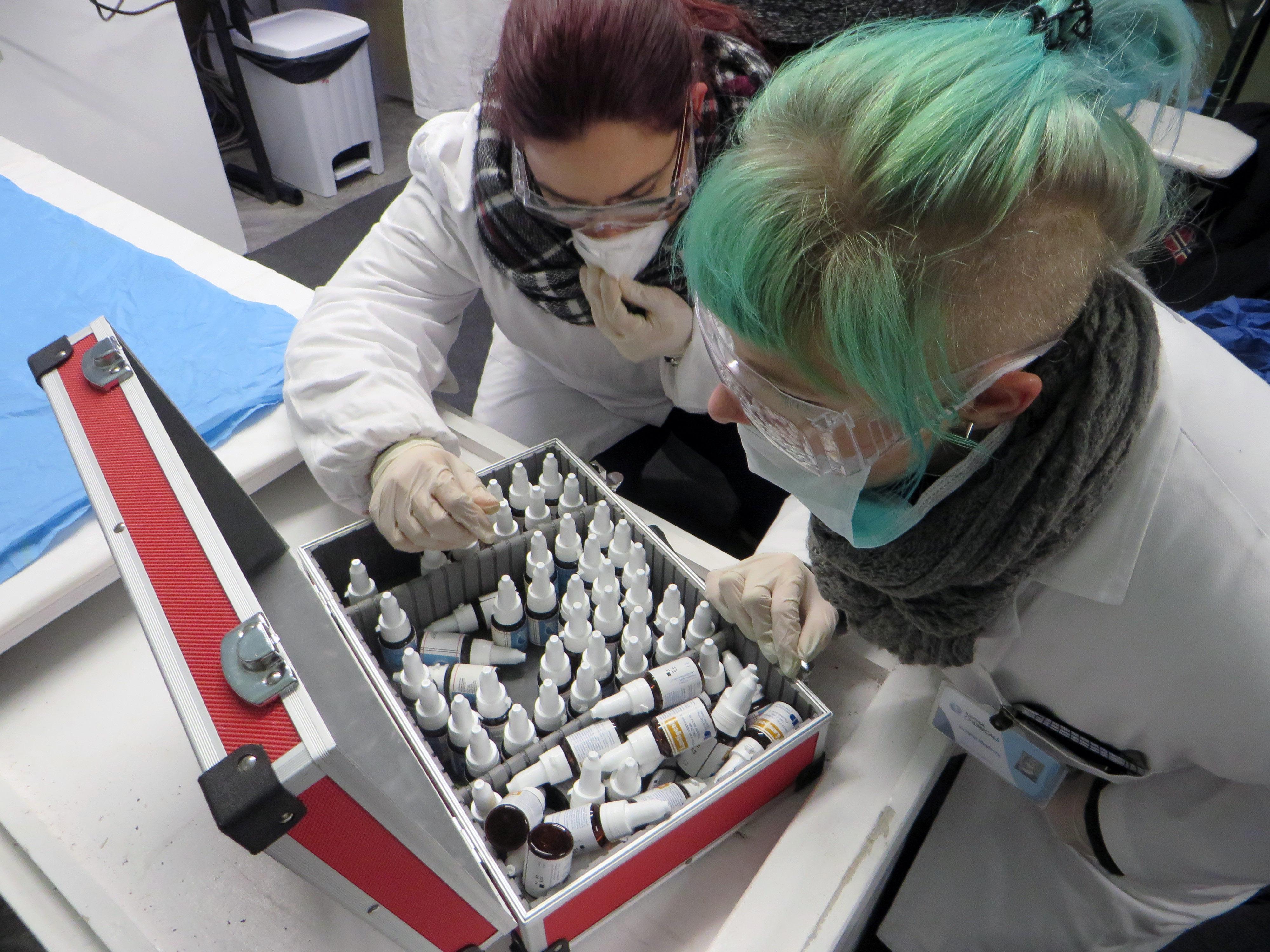 So much fun in the lab. Photo by Kadri Umbleja.

Playing as a scientific

So I could play as a scientific, and it was so great! I’ve always wanted to play a doctor. I love medical investigation in larp, and it’s something recurrent in the games I design. But this experience was in another level. Totally. 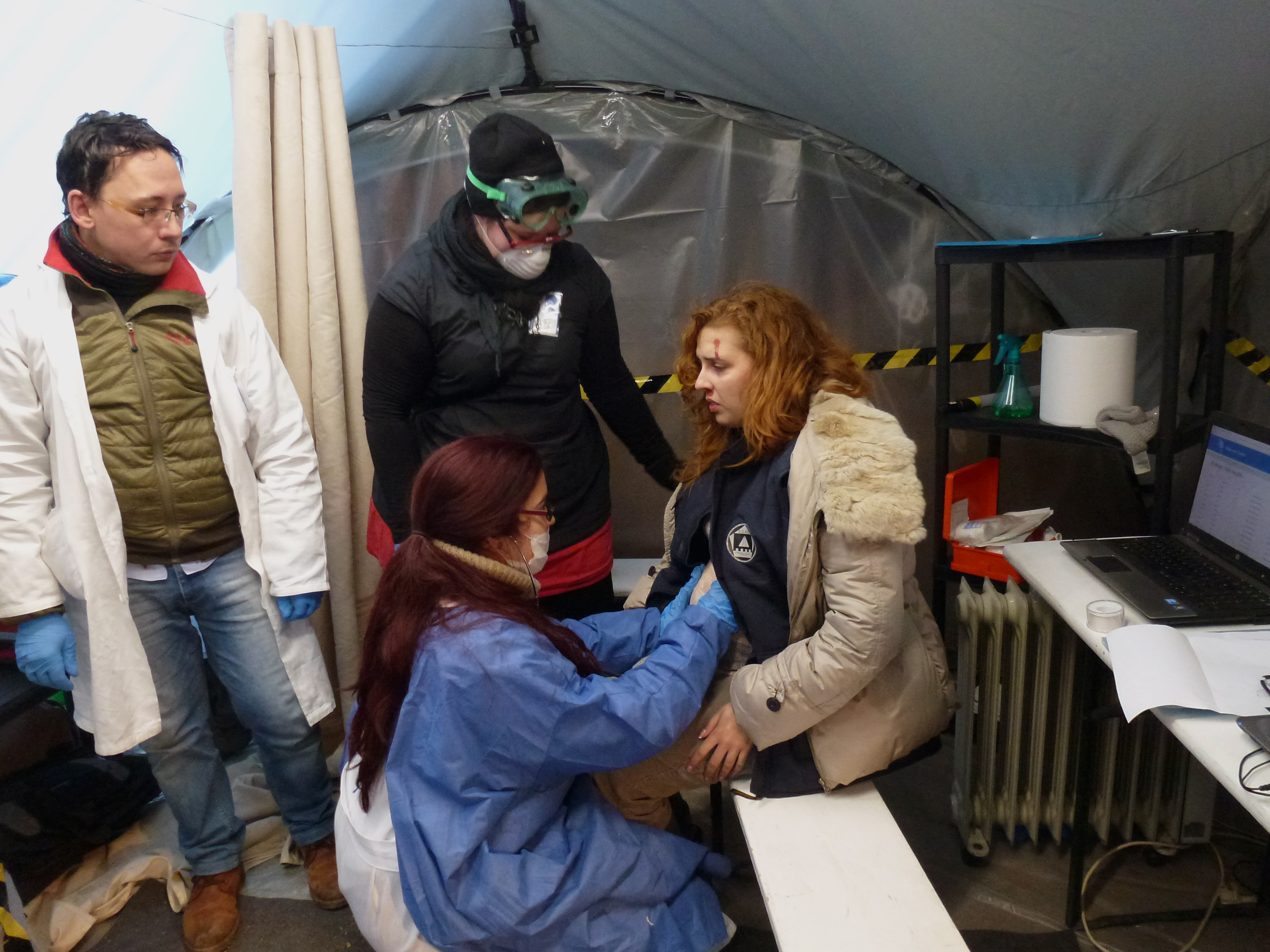 Checking the pregnant woman for the 5th time. Photo by José Fabregat.

Marco Ascanio and his team did a great job setting the lab, and the investigation design was so well thought. We could perform blood tests (we put an appliance with a blood bag inside and we could really extract blood from patients and analyse it afterwards!!). We had a book full of instructions of how to perform each test (real chemical experiences in which we should do it and actually investigation them). We had the best larp-made machine I’ve ever seen: the tomography. Running the tomography machine was a pleasure, and it gave me a lot of play with the town people, afraid of us and our strange things. And we have a pc-program where we can put all the data and it will gave us results that were needed for the resolution of the game. 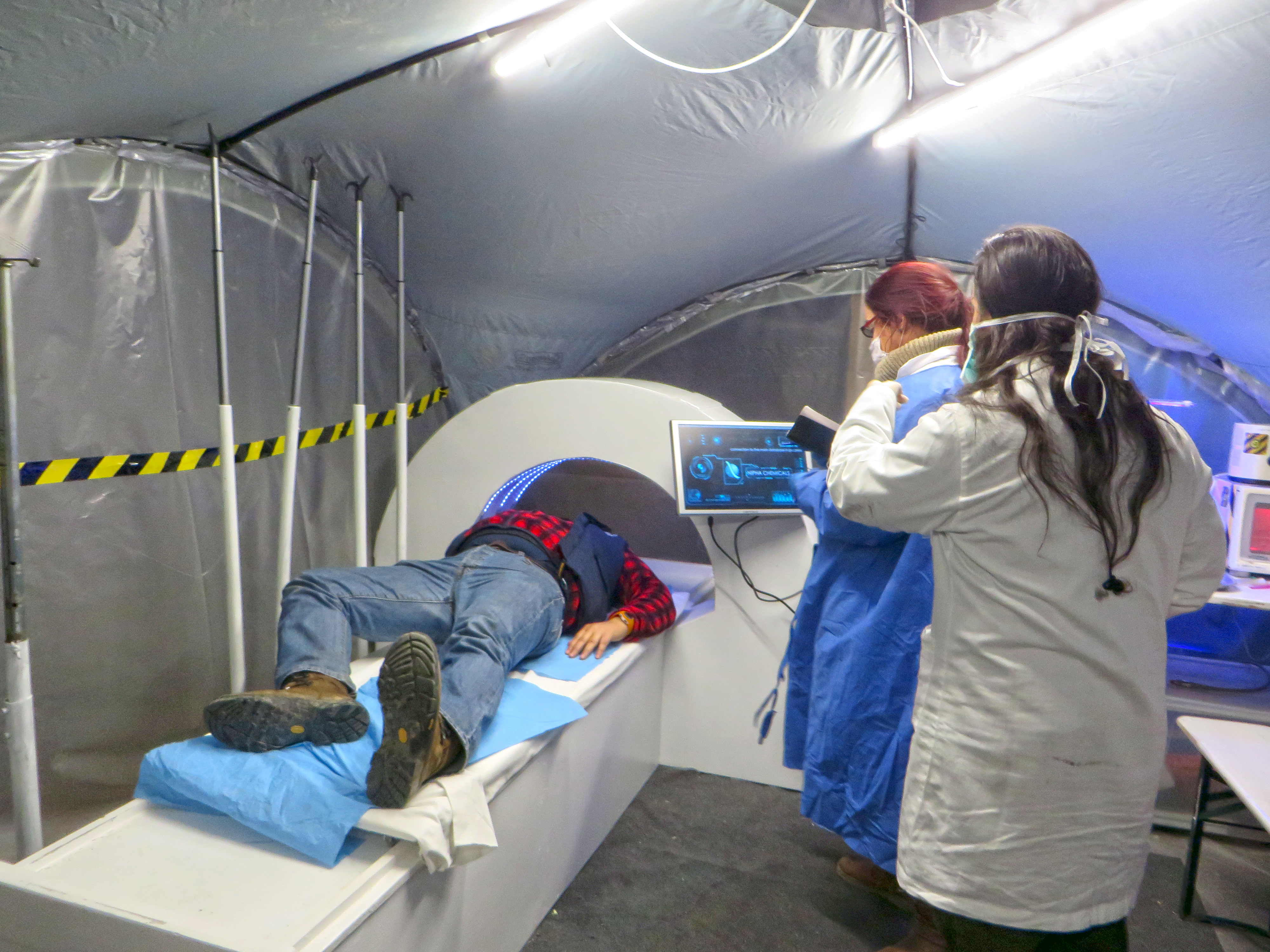 I can’t really explain how terrific the experience of being there was. We worked for hours, and hours (sleeping only three each night) to being able to figure the mystery. But it was great play, and our co-players were so great also.

Now, I do know that those things could be made in a larp. The sky’s (maybe the money) is the limit! We should think bigger to archive larps like that. And the high production levels weren’t only in the lab: the real vehicles had the name of the different agencies, the town doctor has his office with all the patients files, the make-ups… So impressive!

I could talk and talk about this amazing experience (even if I know that some people had a different experience about it I think generally was a really good larp), but I’m trying to be secretive and let you experience it if they make another run. In the meanwhile, we’re waiting for more Italian larps to play on 🙂