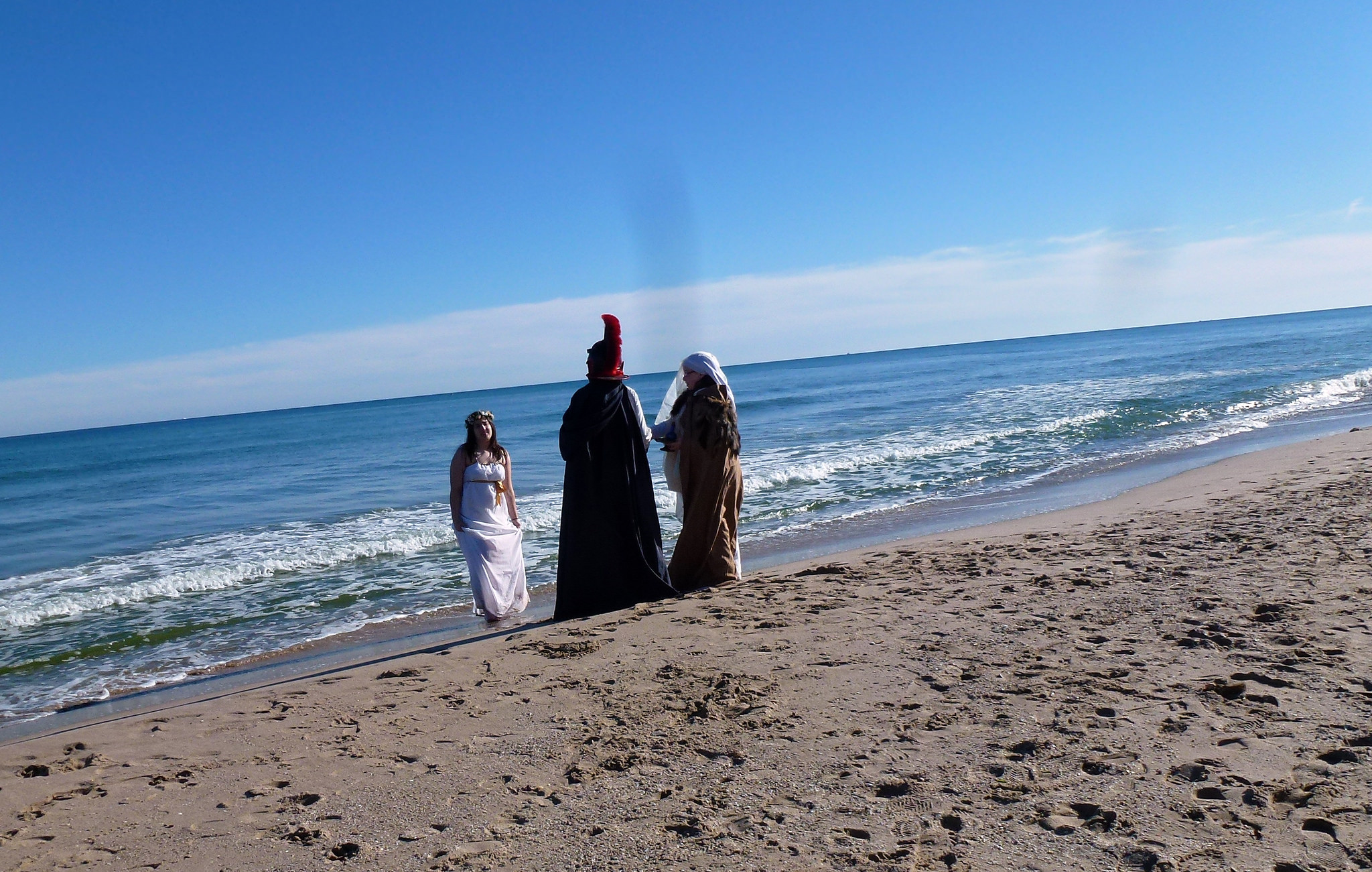 Some days ago I read a post in Larp Europe asking for Larps which included children or children orientated. I read the answer very closely as my talk in the first Entrerevs (Spanish larp design conference) was about it. And I discovered that between 2013 and today nothing has changed in the Spanish community and the problems that we are facing are common in other cultures (even there are some significant changes). So that’s why I decided to translate my talk to English and I will try to do a part in which I put it in perspective after the years passed.

Time flies, and those who began to play larps are not teenagers anymore. Fortunately or unfortunately, the pass of the time bring some new challenges and responsabilities: a work to attend to, a couple or, even, children. Is that a reason for giving-up our passions? Do we need to park our children with their grandparents or a nanny each time we want to enjoy a larp? How can we spread our hobby to our kids?

The answer is not easy. Most of the larps until know didn’t include the possibility of going with your children. And, if they let, we should carry them with us all the larp. That is why neither us or them could enjoy totally. The reason is that the needs of children and adults are not the same. And, between children, age is an essential point of breakdown, because they need different kinds of larps and more or less adult supervision.

Until know, the experiences I knew, included that the children when to the larps -as TimeLords- or, simply, they were one part more of the larp, without stories or characters written for them, depending on the interest of some players to create them content. In other larps, as «El Despertar de Cyric», their own parents were the responibles for written the children larp so they can enjoy a little bit.

With that questions in mind, I asked myself how we can integrate the children in Gorgona larps. For years, my experience as scout instructor gave me the oportunity to integrate rol-playing in our activities in some many ways: interpretation, themathised gymkanas for developing new abilities and, with the older, little larps specially prepared for them. But for being able to integrate them in an adult larp, we need to analise well t 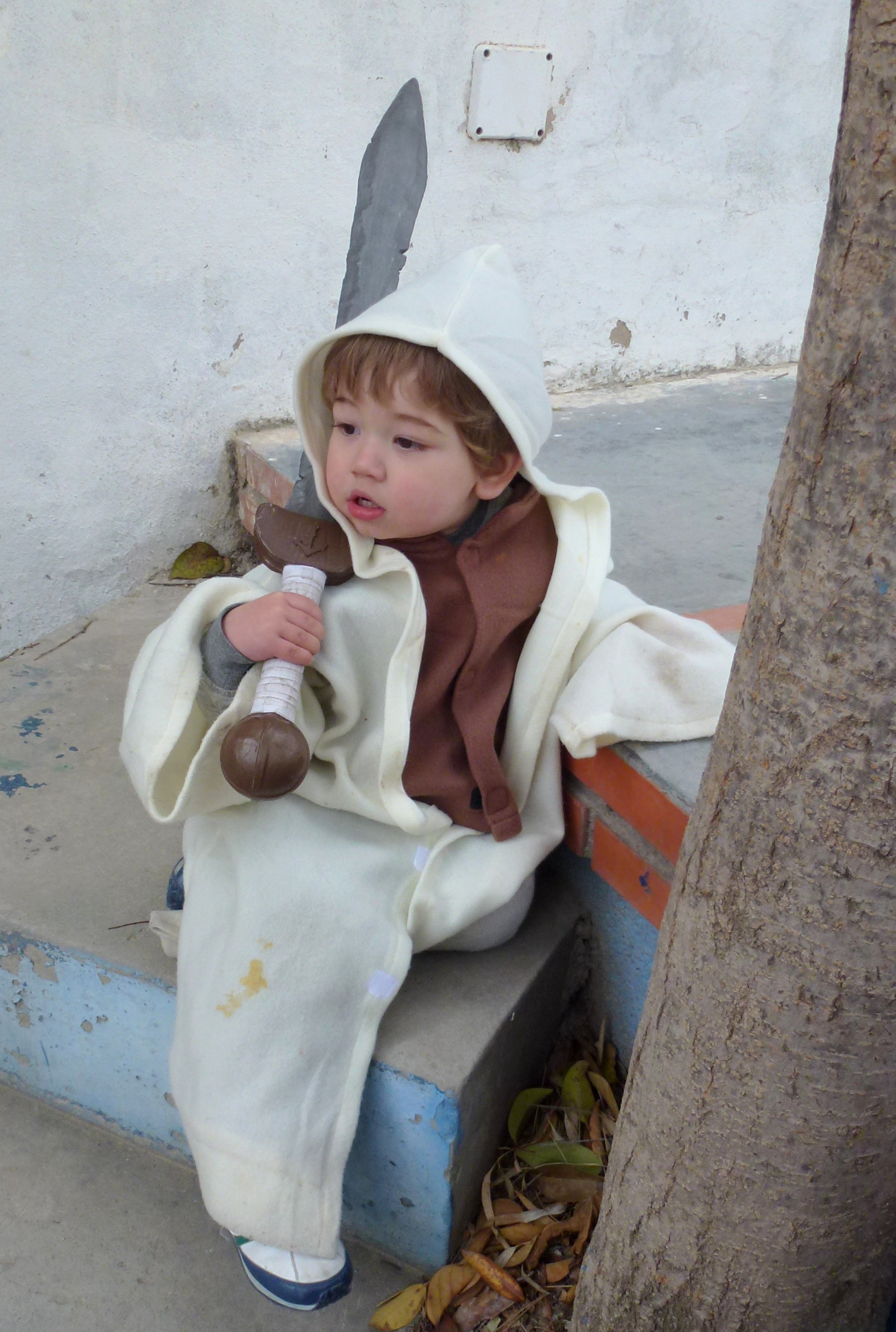 he problems it carries, and the benefits that we can enjoy.

First problem comes with the children between 0 and 5 years-old (Fig.1). In that age, they are too young to let them have any freedom, and they are really dependent on their parents, without any authonomy. In addition, they are not capable to realise that they are in a larp, and they can’t play a complex character for long tmes. Children in this age going to the larps usually goes with their parents, which make turns to look after them. The parent’s characters are fully integrated on the larp, but they can’t enjoy it in the same way. Sometimes, they have too much to do as a characters and it creates so much anxiety (Fig. 2). 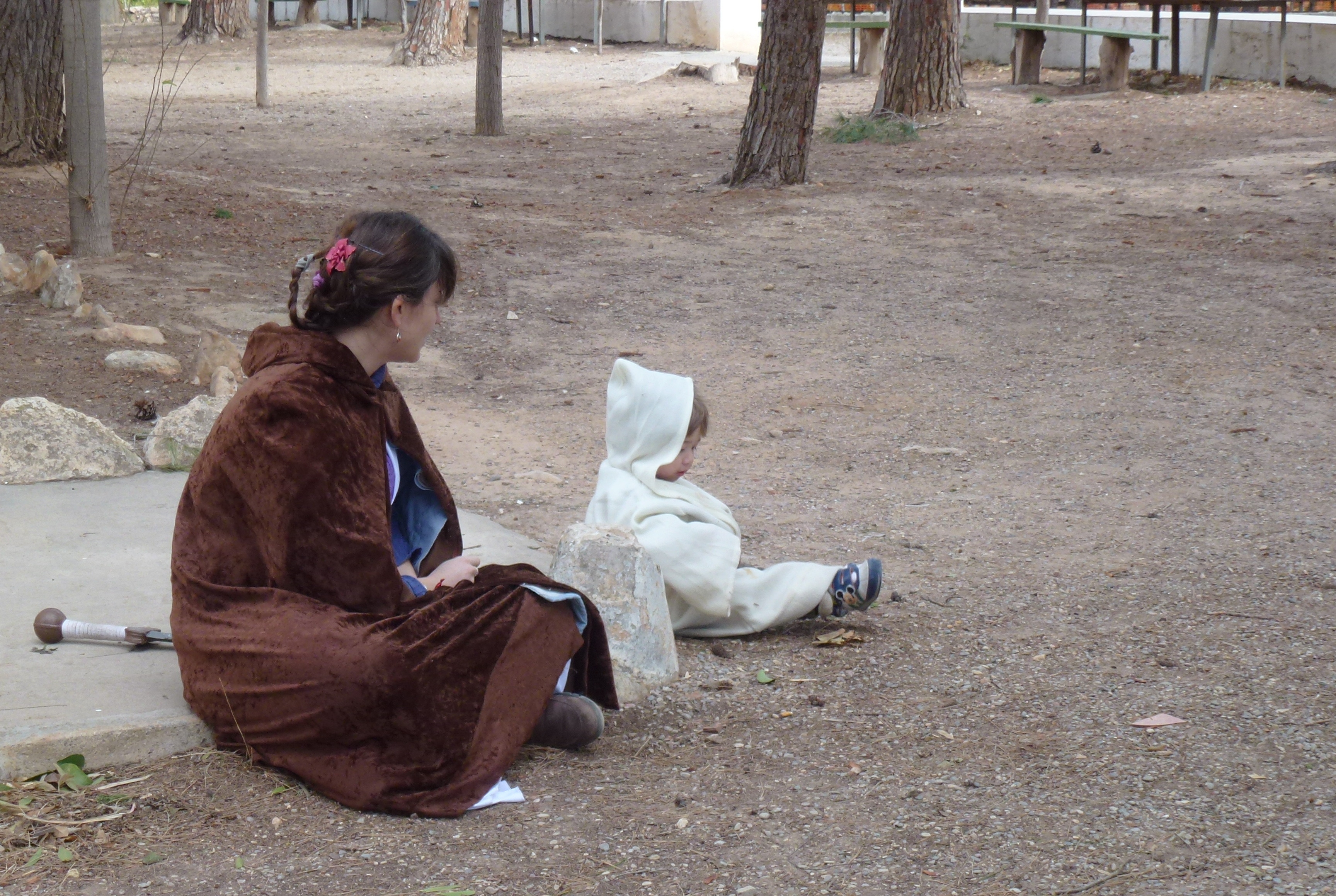 Fig.2: Toddler with his mum

One of the solutions that we can provide is the creation of kindergardens in the bigger larps. After a certain amount of interested parents, a person could be hired to be their nanny. They can do activities related with the larp setting. Parents could enjoy some hours of freedom and full immersive interpretation without giving up all contact with their children during the weekend.

Children between 5 and 7 can be part of a lap, but they required a strict surveillance. They aren’t going to be on character all the larp, but they will enjoy a good gymkhana, if they have an organiser focused in them. They have to be a small group, between three and five per organiser. 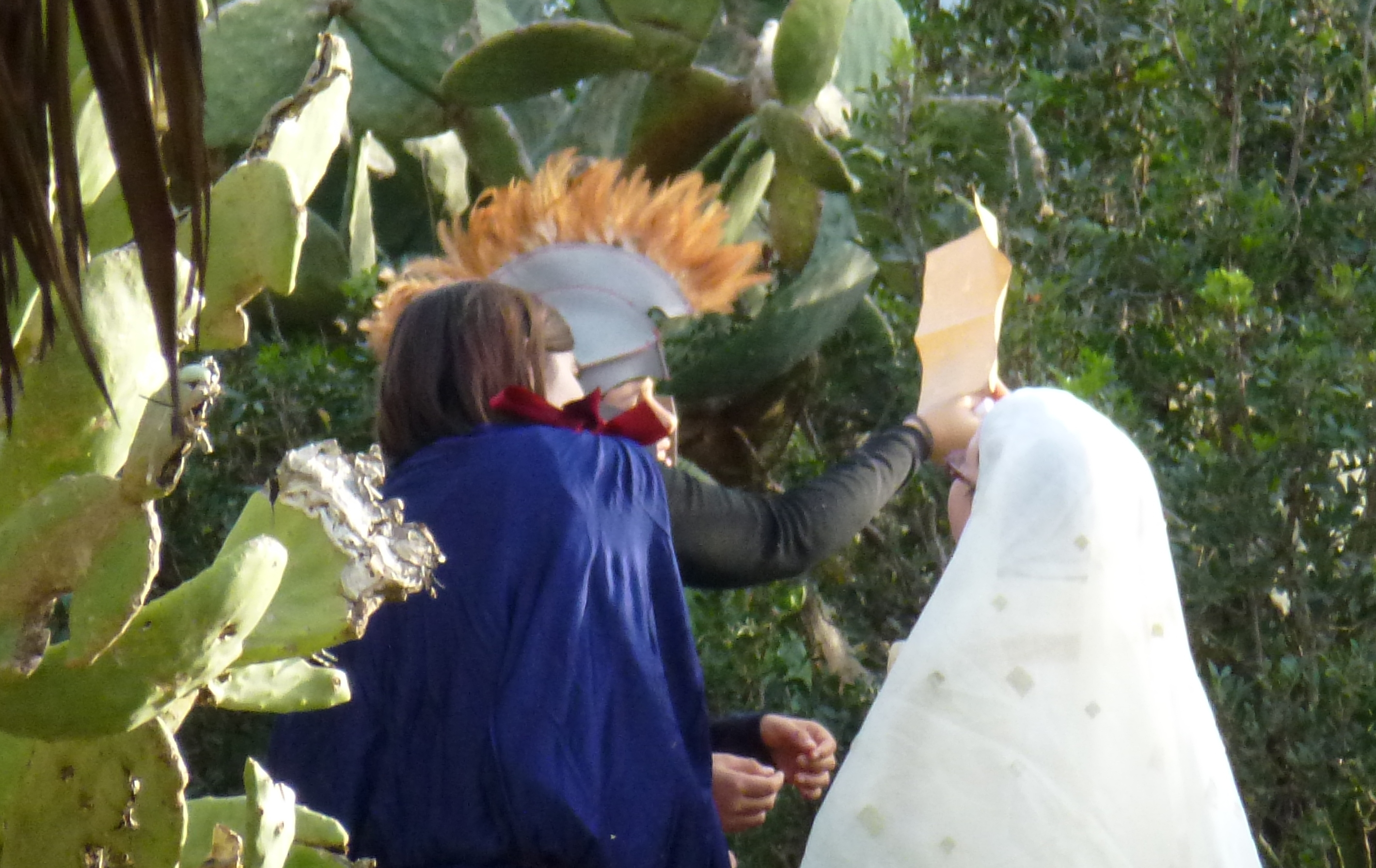 Fig. 3: Kids with their own organiser

The ideal age is between 8 and 12 years-old (Fig.3). In this age, children can read their character independently, understand it and play it. They feel it, being part of a big adventure. With an organiser dedicated to them, the results will maximise (and he/she didn’t need to be with them all the time). The could have more freedom or, at least, believe they have. They can play with the adults characters, but they always should have an adventure specially designed for them. So they can feel special. Each child should have their moment, when they are important to the group. They will learn to work in team and solving complex problems. Even though, you should know that they are children, and they need a big physical activity. You should design active parts, that allow them to be tired and more relaxed. 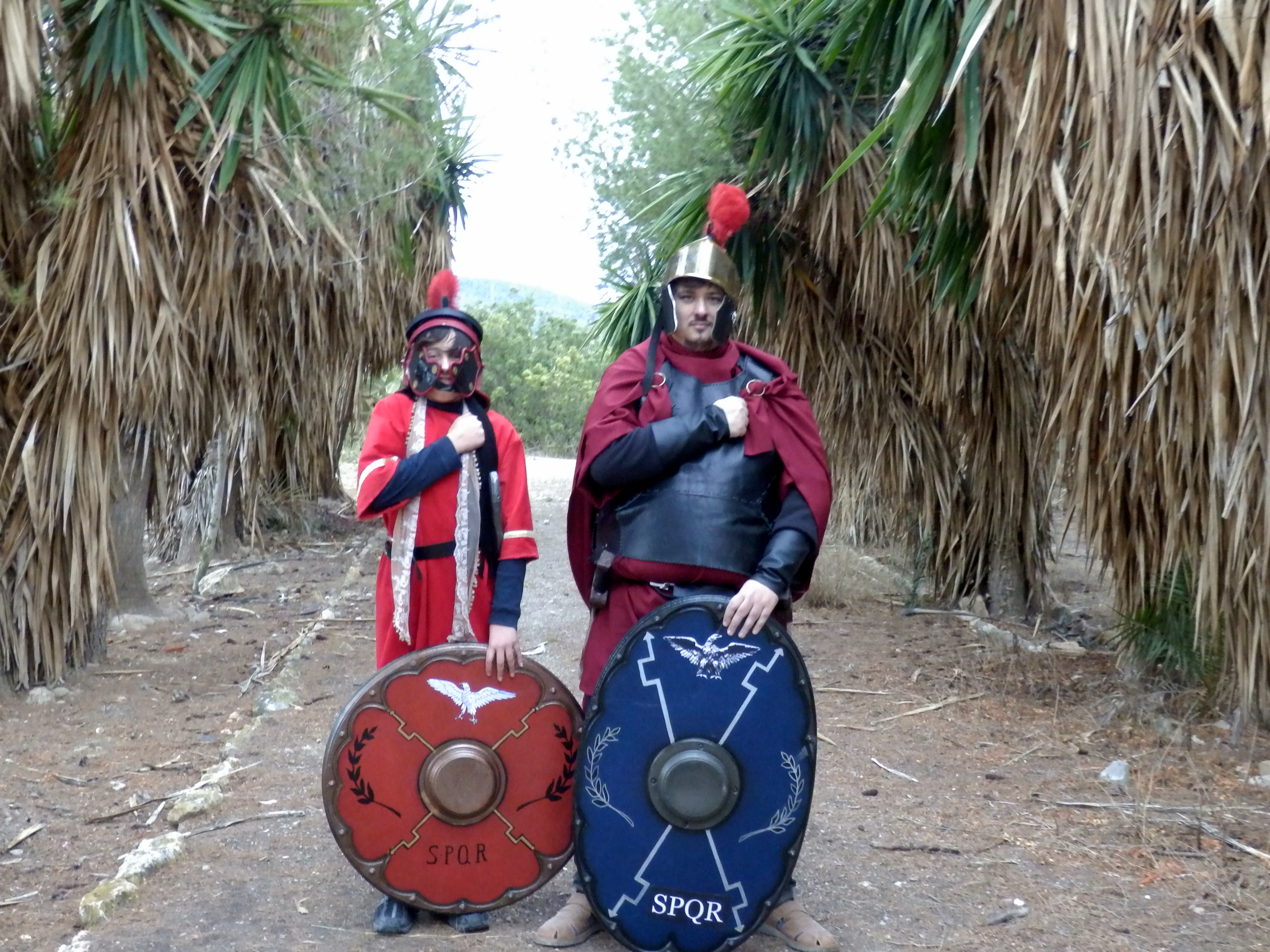 Fig. 4: Teenager with an adult larper.

The most difficult age is between 13 and 16 -when we consider that they can join most larps as an adult player-. In those years, children aren’t anymore, they are teenagers, but they are not mature enough to be part of the adult themes in a complete way (Fig. 4). In his stage, we need to give them characters with more responsibility and relation with the general larp, but being conscious about their age. It is a moment of adaptation, growing and mixed feelings. And we should be aware of it for integrating them. The ideal is having a group of youngsters of this age so they can play and work together, nor being children nor adults, but being the bridge between both groups.

Nevertheless, not all larps are prepared to welcome children in them. If you are preparing a really immersive horror larp, maybe having little children isn’t the best choice. If they are truly terrified, they are going to be out of the character, and they can’t follow the adult argumentation… It’s neither a good idea if you’re going to do a survival larp, or a larp with adult content as sex (as a main thing).

If you believe that your larp and your organisation are prepared for accepting minors in them, those are the things you should be aware of: 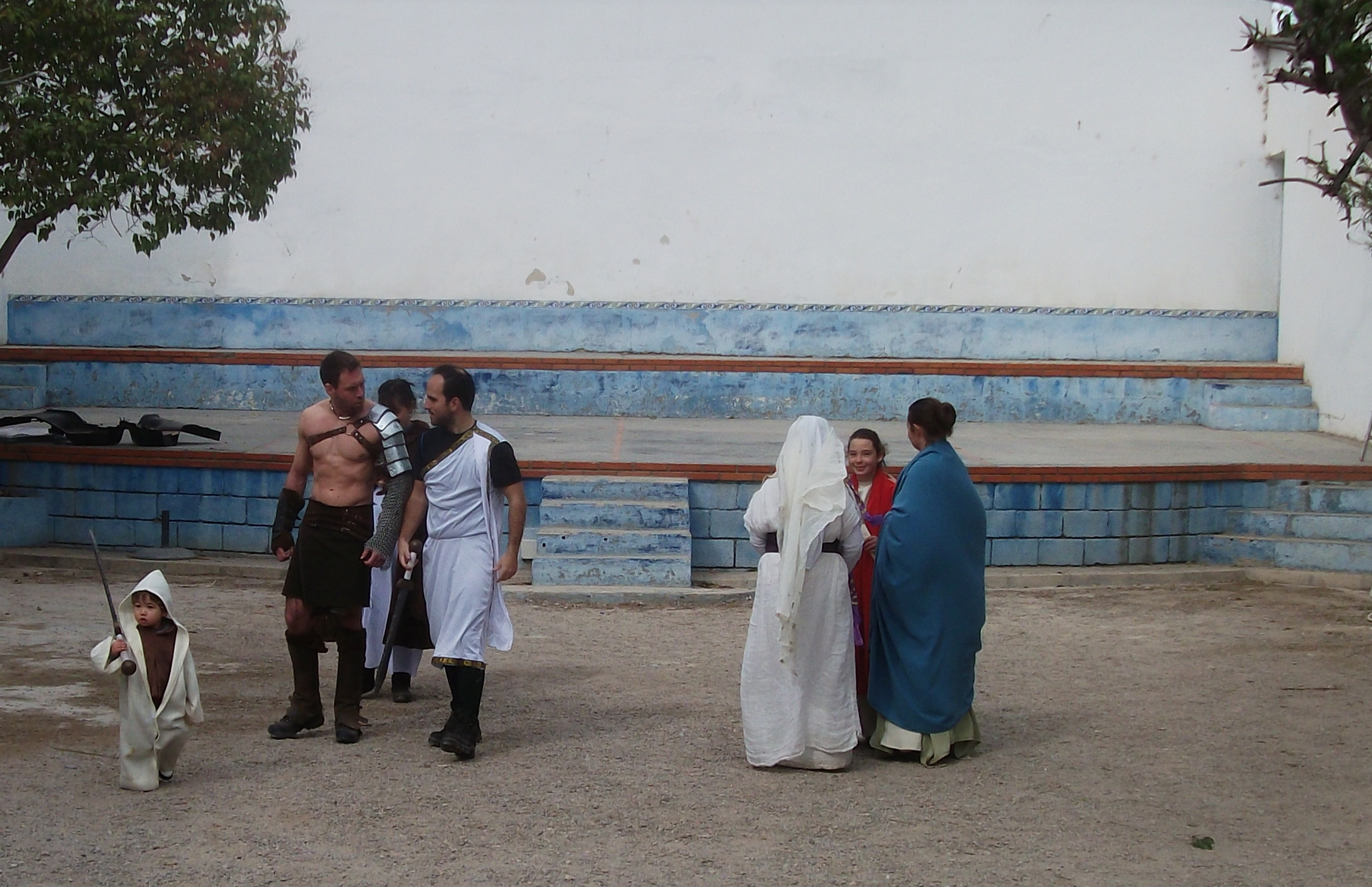 Fig. 7: Kids inside their own adventure

Finally, I should encourage you to integrate children if you can (Fig.6). It’s an amazing experience for all the players, including scenes that are truly unforgettable. In Eureka -our steampunk Rome larps- we made two with children integrated, and an intermediate one (only for them) so they can do the transition between them. I wanted to acknowlege all the parents that had rely on us, and the children -between 9 and 13- that had come to play with us, and they had put all their illusion in each adventure (Fig 7). They are the ones to make true my crazy ideas and the reason why I’m writing this: a personal reflexion about my experience that I hope it will be of your interest.

In those last three years, a lot of things have happened to larps in Spain. We had opened to an international audience (La Sirena Varada, Blue Flame, Hasta que la Mafia nos Separe), we had made new big boffer larps, we had improved a lot our progressive scene… But, even though, things are not better for children in our larps.

All the larps that I’m aware of in Spain that admits children, rely on the parents to prepare things for their kids. Even ti could be an amazing family experience, I think we can do more, and better. Larp can be an amazing educational tool, so larp writters can use it to improve the target of the larp, creating a yuxtaposed stories that enrichened everybody experience.

About larps fully dedicated to children, I’m not aware of anyone if they are not edu-larps done inside schools or scout groups, usually with a short lenght. In this matter, there have been some improvements as the first academic works in Spanish edu-larps (Thank you, Janire for your amazing job).

So we need to work together, as a community, to be able to do family larps that could be as interesting, or more, than the adults ones. Don’t be afraid, there’s a world to discover!

Mirella Machancoses. Based on an Entrerevs talk.