Larping abroad, larping around: a Spanish girl in The Solution.

It’s not very common than an Spanish larper goes to a Nordic Larp. In the last year, things have changed a bit due to the big Blockbuster larps as College of Wizardry or Fairweather Manor. Before that point, only a few have gone out of our borders (thanks Zuell, Juan, Pablo and Nast for opening the path). But each time it happens, the Spanish progressive larp scene learns lot of important stuff, has the opportunity to mix with the people who created the larps we have read about… It’s undeniable that Spanish progressive scene has learnt a lot of Nordic Larp books and papers, but experimenting the techniques it’s a whole different thing.

And that’s why I decided to write this review from another point of view. I don’t want to talk about (or not only) the metatechniques or the evolution of the game, but explain what I have learnt and how a Spanish girl feels when is larping abroad and alone. Maybe this is not the post you where expecting, but it’s what I needed to write. So here I go.

I finally decided to join The Solution after a talk with the great Esperanza Montero (to whom this post is dedicated :-* ). She was going to write characters to get a cheaper ticket, and she encouraged me to ask for the Nordic Larp Fund (as I wouldn’t have time to write with the wedding and the honeymoon). And I get it! I was so excited about it! I could finally go to a proper Nordic Larp (FM experience was great, but blockbusters have many differences), in a setting I loved (I truly love dystopias).

The doubts and fears appeared a few months after, when I began to prepare the travel. I needed to travel by myself to the other part of Europe, and Esperanza couldn’t came. Was I able to do it? I told myself “yeah! You’re a strong woman. You can do it”. But it’s not as easy as it could seem. I was really terrified of spending a night alone in Amsterdam, and, after, went to a larp where I barely knew a few people and not really well. I felt alone and all my insecurities were stronger than ever.

My Impostor Syndrome was stronger than ever. I felt like a bad larper, that I shouldn’t be playing with the “olds”, that my English wasn’t good enough to be there. I suppose everyone has felt something similar in a point of his or her life, but the fear was paralysing me. And when I discovered that this week I had to move to England, I nearly quit. However, my wonderful husband convince me to go. He knew that I needed to do it by myself, play it and feel empowered. I’m so grateful for that. 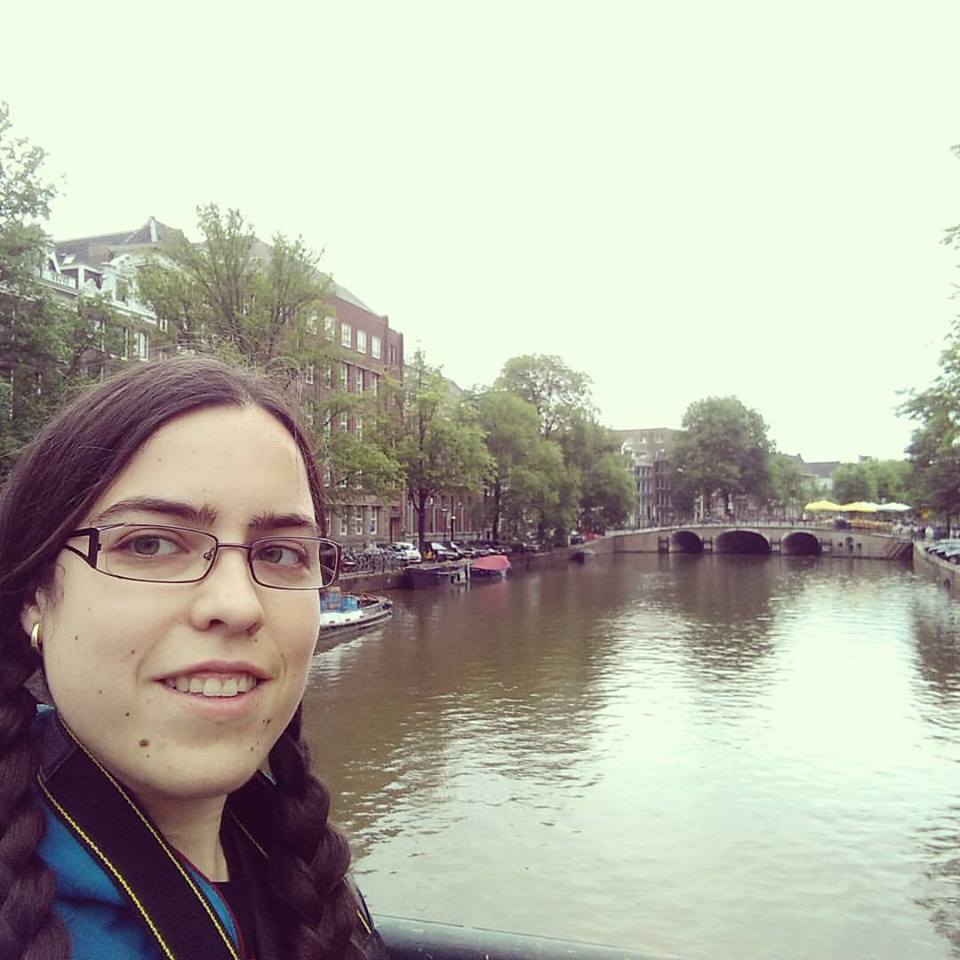 In Amsterdam, the night before the Larp (my plane had a 17h scale).

When I arrived to Gothemburg, even Marie receive me, I felt so alone and lost. And when I arrived to the larp, the feeling increased. I could say hello to some people (Linda, Mila, Karolina…) but they were in the previous wave so they were preparing themselves to be took into the larp, so I couldn’t really speak with them. I normally need the socializing previous to the larp, I love talking with people, know them… but my fear was so big that I couldn’t. I felt misplaced.

The workshops helped me to lose my doubts and enter into the larp. I will do a ellipsis here as I want to speak about them and the larp in different parts. But when the larp was finished, I felt better with myself, happy to have been able of playing it. During the postlarp party my fears came back, and I felt so lonely. After an intense larp, I really need hugs, having a friend with whom I could relax, but I hadn’t. I have met some amazing people during the larp, but I have no further relation with them, so they were with their friends, and I was alone. I didn’t know where I was going to sleep or what was going to happen with me, and the freak control inside me couldn’t manage that. But I finally came over it and I made myself speak with others, enjoy the party and solve the problems as they came. And I’m so happy about that. I push my limits a little bit harder, and I discovered a lot of things about myself.

First of all, I attended to the third wave of the larp (short ticket: 30 hours). That’s important because, as I could see later, the experiences not only during the event but also in the previous workshops, have changed a lot between the long, the standard and the short waves(1). If you want to see an interesting review about the standard experience you could read Karolina’s review.

My experience in the workshops was totally different. For me, they worked so well not only for building the relationships but also for learning the meta-techniques. Their rhythm was so good, and I really appreciated the ars amandi and fighting ones.

The ars amandi workshop was the best I’ve ever done. For being clear, I usually hate the loving meta-techniques. When we have used ars amandi in Spain, is usually meanless. It made the sex feels weird, people having sex in front of other people without caring about it, and that isn’t realistic for general situations. Relating with intimacy, I’m with Karolina when she wrote about it in her blog. Maybe one day I would develop my thoughts about it, but this is not the correct moment. This workshop was really well done, and for the first time, I realised how it could be used for rape, and all different kinds of sex. I learned a lot of how explaining and work the technique in a workshop, and I hope we could use that knowledge in future Gorgona larps.

Furthermore, the fighting technique was developed for the needs of this specific larp. And it worked so well. As the set was narrow, they need something that could represent violence without danger for the people involved. They decided to do it pushing the other by the shoulders until they reach the ground. It hasn’t have to be a real fight, just a way of representing it. It was physical, it made you sweat. For me, it worked so well.

During the game, as it usually happens, they were developed. They set the mood and the beginning point for the participants to use them, and the players use them in the way they are more confortable with. In some of the study groups (2), both techniques changed into something more physical, allowing more contact. But it was ok at it was escalated between the larpers.

The larp began going inside the white room. Inside it, you can not speak or touch anybody. For me, it worked well for the beginning of the game. It helped me to go inside my character and trying to find ways of communicating without words. When we were conducted into the complex, my mind, as player and as character, was totally empty, and full of fears. Even though, the long stay in the room made some people to begin to sleep, or doing some strange things, that didn’t help the immersion. I guess that the experience in the white room was so different due to our own core groups (3).

When I went inside the facility, all was in it maximum point. We were the last group to go into so everyone was shouting, was part fo some of the study groups… It was a shock. That was the larp I wanted so badly to be in.

But I blame myself. I couldn’t really immerse in my character. And that’s something that usually don’t happen to me. It was really frustrating. I keep thinking and acting as myself, as I thought I should do. But not as Eeva. And I hated it. I have one of the most important scenes without feeling it. I was sad and I blame myself for it.

But in the middle of the larp, they call me for an interview with one of the npcs. And it worked so much for me. I realise that I should change my play, become more aggressive (as the character was that kind of) and change of core group. I also realise that I hadn’t eat for nearly 24h, and I cried when a guard says that I should go into the facility with the banana I had as compliment after the interview. I had cry for a banana! And suddenly, I realise I could be Eeva.

After that point, I enjoyed the larp more. I joined the Pack and I could finally be part of something (thanks all the players for that). Physicality helped me to be one with the character. And social interactions were stronger from that moment.

Even though, it wasn’t one of my best larps. I have real problems with being one with the character, and I can’t blame the organizers nor the other players for that. I think it was something inside myself. I only hope that the others that played with me enjoyed it.

What should we learn? 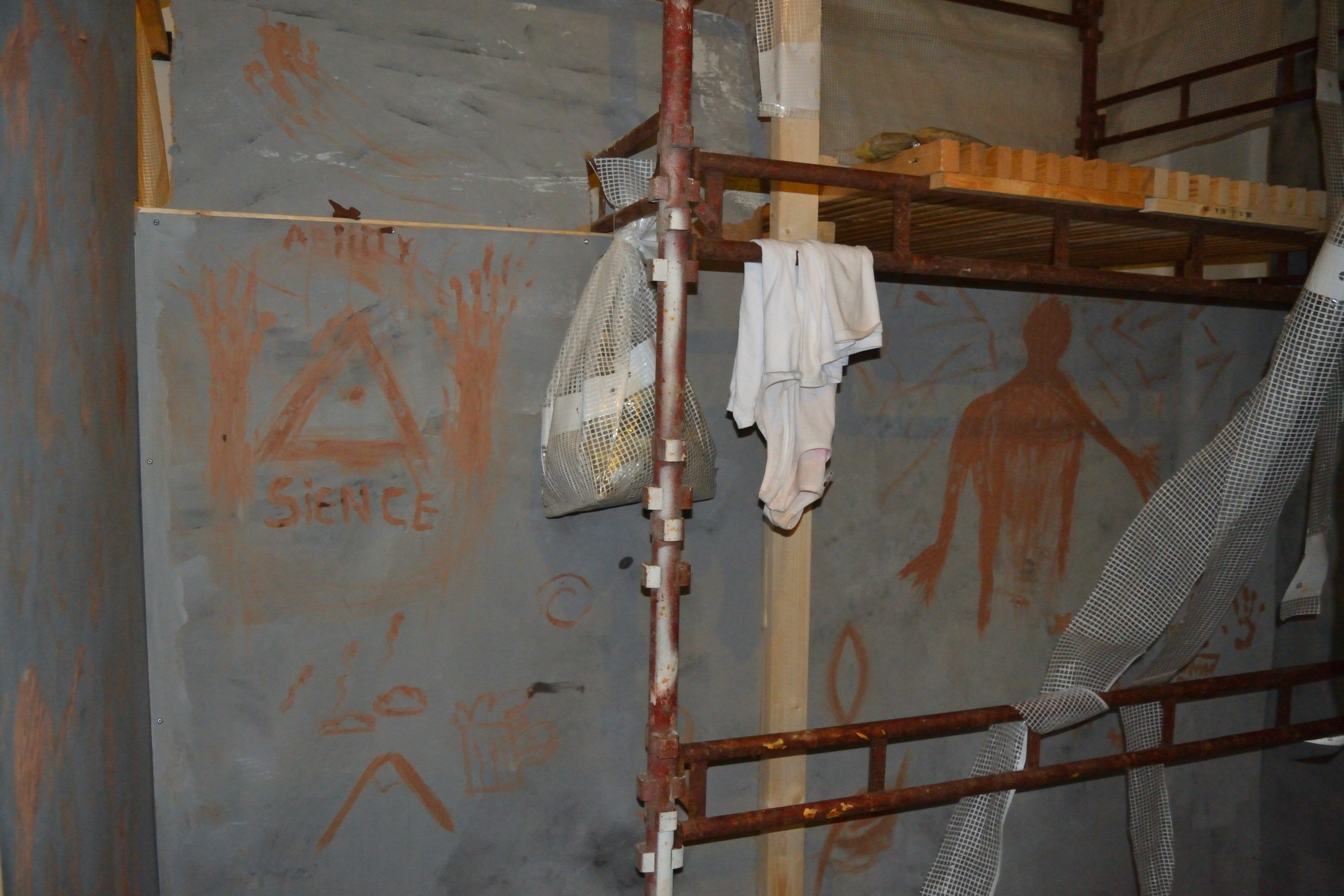 Inside The Pack part of the set, after the larp. Photo by myself.

I want to really congratulate the organizers not only for the larp but also for being such amazing people. They helped me a lot. I didn’t speak about the design of the set (it was really amazing!) or about the food (it was disgusting but really well design), as I wanted this to be a personal experience post. If I find strength I will try to write another part speaking about all the other things. 🙂

(2) The larp was divided in four study groups that you could join or abandon when you wanted, letting you explore four different approaches to the experiment.

(3) Core groups where the previous relations of your character, so they have a common story and they had decided to join the experiment together.