One year later: larp and babies

Nearly one year without writing anything in the blog. I’m so sorry! But it hasn’t been an easy year: the little one had suck all our energy, I was feeling really alone in England, and it has ended with all the family coming back to Spain. So, I finally have the energy to sum up the larps I’ve been playing this last year, and how it has been playing with a baby/toddler (Spoiler: it wasn’t easy).

In the previous post I could write, I was really worried about my first larp alone with the little one (You can read it here). Since then, I have played several larps, some of them with the baby, other alone (but only short ones). I’m going to try to summarise those of them that were bigger or that made me learn something important. I hope you enjoy it.

«La Máscara» is a short larp (around 8 hours of play) written by Producciones La Sierra. It was played in a personal house, with a garden and a pool, so it required little space for playing (two rooms and the garden).

In La Máscara, you play one of the nobles that have been locked for three years in a fortress, hiding of the pest that has been desolating the world they live in. The setting can change around what kind of characters the players choose to play, the gods they decide to worship… so each run can be pretty different from the other.

The larp is designed around some core stories that have to be completed be completed by the player. Mauro (the designer) wrote some concepts (The Doctor, The Noble, the Priest…) that can be played by anybody. He has written your concept up to the point that you arrived to the castle, with some big secrets that can be played in the larp, and the player is in charge of developing the other relations inside the castle. It was really similar to Mo Holkar’s concept of fleshing the skeleton. 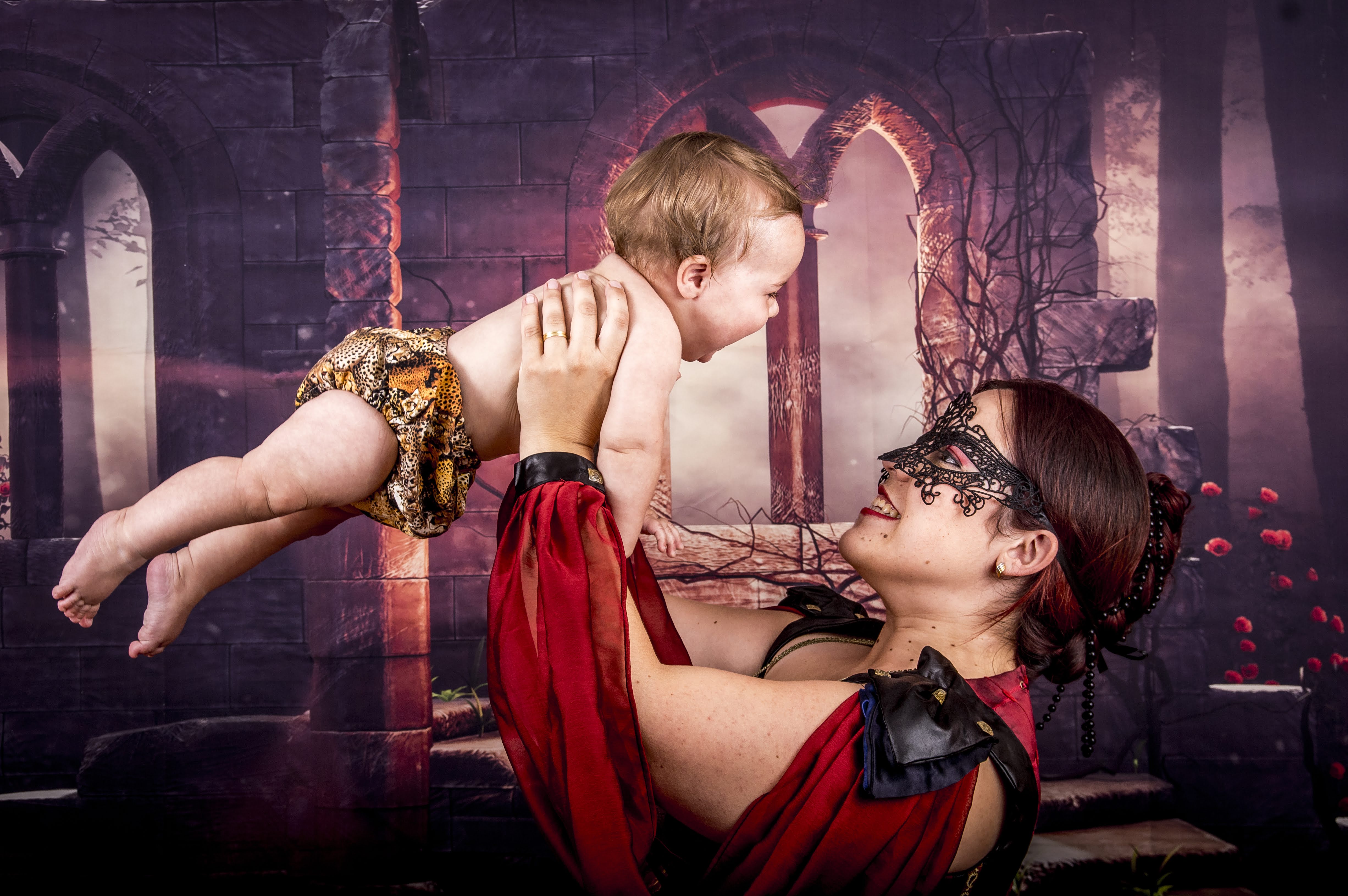 Mauro and Irene, the hosts and gamerunners of Producciones La Sierra, were kind enough to allow me to play with my little boy, which was 7 months old at that moment. As the game ended late, they gave me a room to put the cot upstairs, and I was able to put him to sleep when he was tired and look at him with the camera I have installed. That worked well. The only problem was the areas without coverage and having a screen with me at all moments.

Playing with the little one was kind of hard. I was lucky that one of the NPCs, Helia, took care of him in some moments so I could play some of the most adult content. I also made clear that, even he was part of the larp (he was my character’s son, as I needed to be able to breastfeed him around) I didn’t want him to be part of the rituals or be murdered… I was’t prepared to play that kind of plots around him (and I think I’m not ready now, a year later). 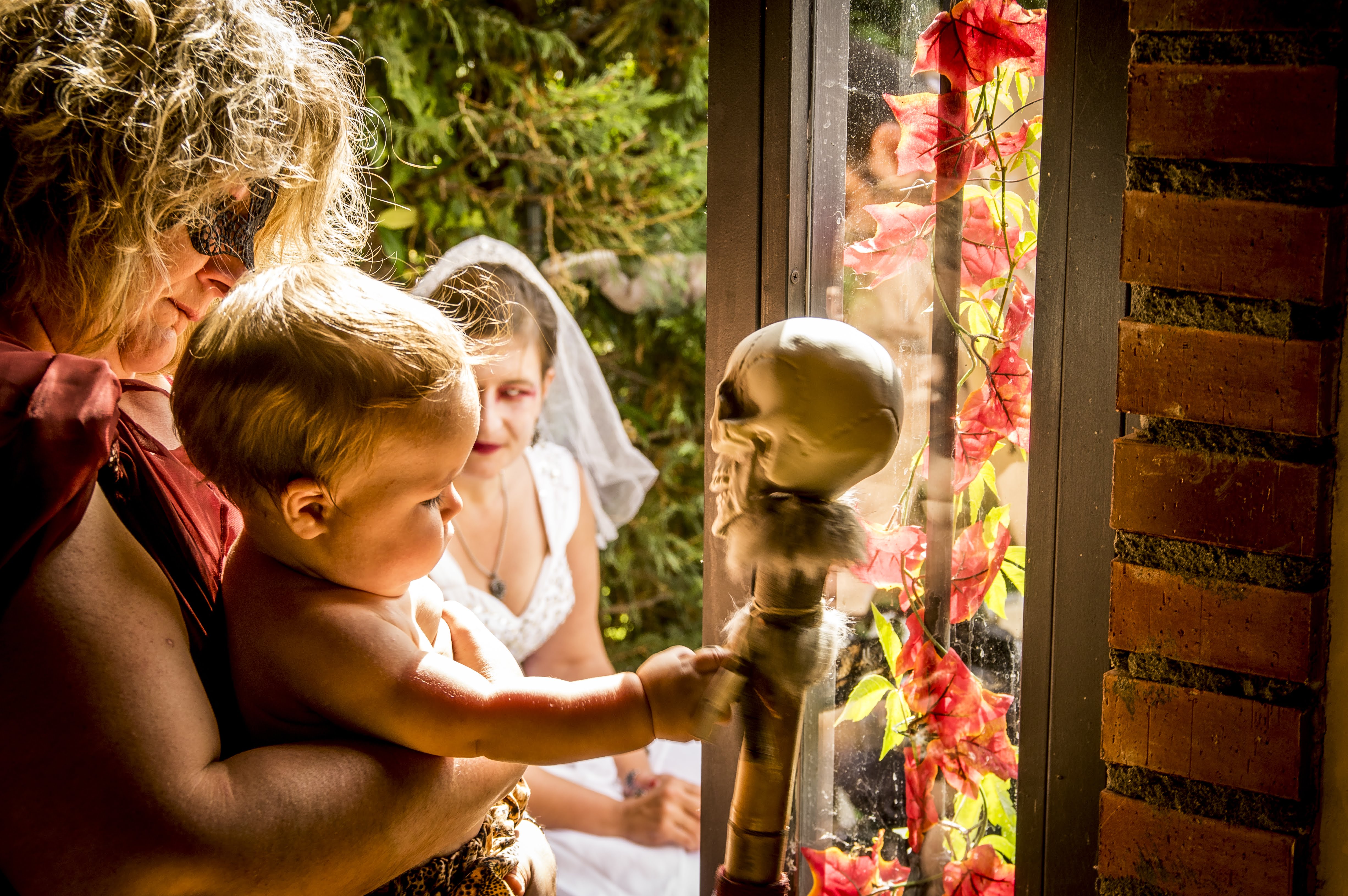 Jano with other of the players (Pili), enjoyed playing with the voodoo scepter. Photo courtesy of Mauro López.

All in all, the larp was great but I was missing having my space to play adult content and be truly inmersed. On the other hand, it was fantastic to come back and do one of the things I love more: playing larps!

The following day to La Máscara, I played again a Nobilis larp planned by Marina. It was amazing, as always. I love the character she has created for me, Lethe, and I wish I could play her more. Being able to express my emotions through dance was really potent.

Designing wise, the big new change we incorporated to the campaign was creating content for the other players involved. Each one of us (three players) had to create a scene for other, so everyone of us have some evolution during the larp. It worked really, really well.

Lethe speaking with the other two parts within herself. Nobilis campaing by Marina Peonía. Photographer: Mauro López.

Meena in This is the End of Marina Peonía.

I was able to play another of Marina’s larps during Entrerevs, the Spanish Larp Convention. It was «This is the End» a really avant-garde chamber larp that play around the end of one world. I was too tired to enjoy it properly. I was one of the organisers of the convention and Jano didn’t let me sleep properly the night before. So, lesson learnt. No more larps if I organise a convention and my kid is around waking up every two hours. Even if we make turns to take care of him.

Also, I had a really weird experience during the workshops. One of the players incorporated the death of a little kid in it and it hit me so hard that I had to abandon the room for a while and I was really near to not playing. And I wasn’t aware it was such a hard topic for me in that moment. So new mummies around, be careful with your new feelings.

And finally, a weekend larp: On Location 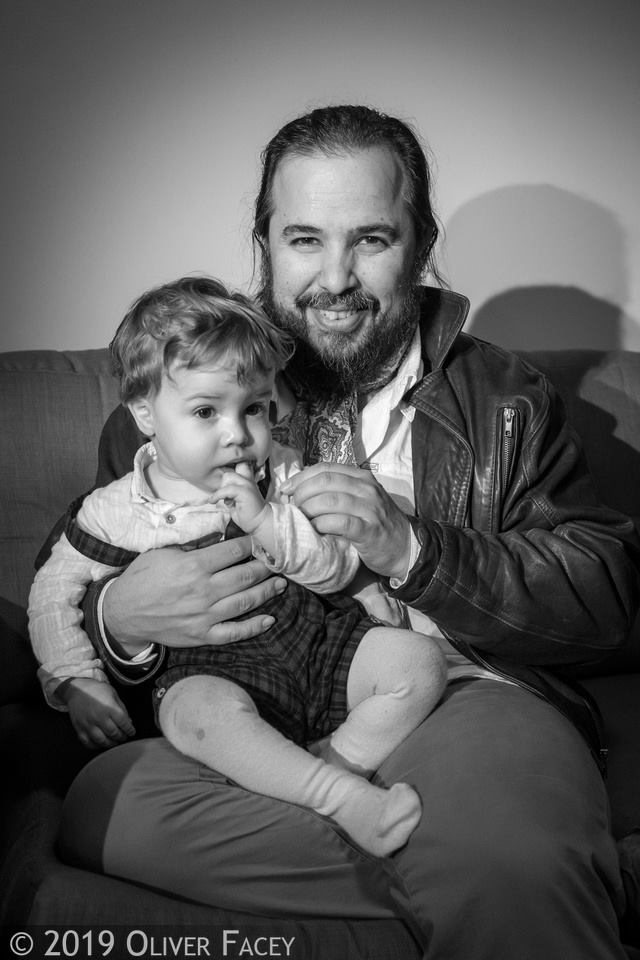 Jano with his dad during On Location. Photographer: Oliver Facey.

Writing it here I think I’m not being fair with this larp, that maybe should have it’s own design analysis. But as I don’t have a lot of time lately, I prefer to write something down now that never.

On Location is a larp by Larps On Location. I was able to participate in it’s second run, in January 2019. By then, our little boy was 13 months, but he couldn’t walk yet.

We went together as a family, so it was easier to organise than the others. We made turns to take care of Jano while the other could play more freely. Jano’s character was my in-game son (so I could breastfeed him) and his dad in-game nephew. We didn’t want to play as a couple, so it gave us the excuse to both take care of the baby but having different agendas.

It was a 1930s game, so we asked the other players not to play sexism with Pepe’s taking care of his son. And we also asked them not to let us out of the play (specially the romantic) because we had a son around. People was really, really kind and they gave us lots of play, even if we weren’t around all the time (Jano fell ill and was a really hard weekend for us). 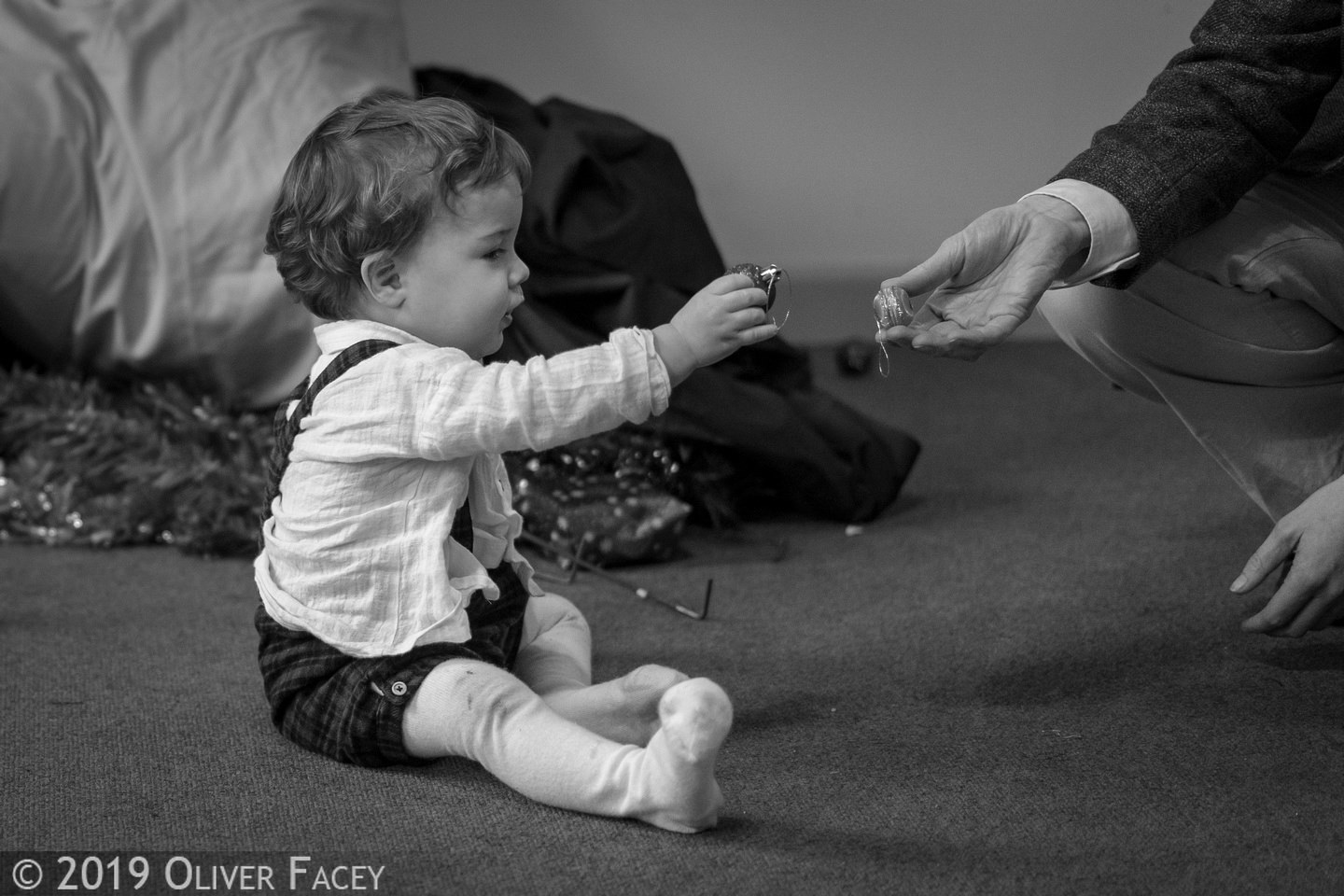 The game was well designed and I had some really good moments, but I feel I wasn’t able to play the intense game I usually play. So even if I enjoyed playing as a family, and we’ll do it in the future when the larp allows us to do it, I’m looking forward to the moment that I can go away from him (right now it’s impossible because we are still breastfeeding) and I can immerse myself in the game without more worries. 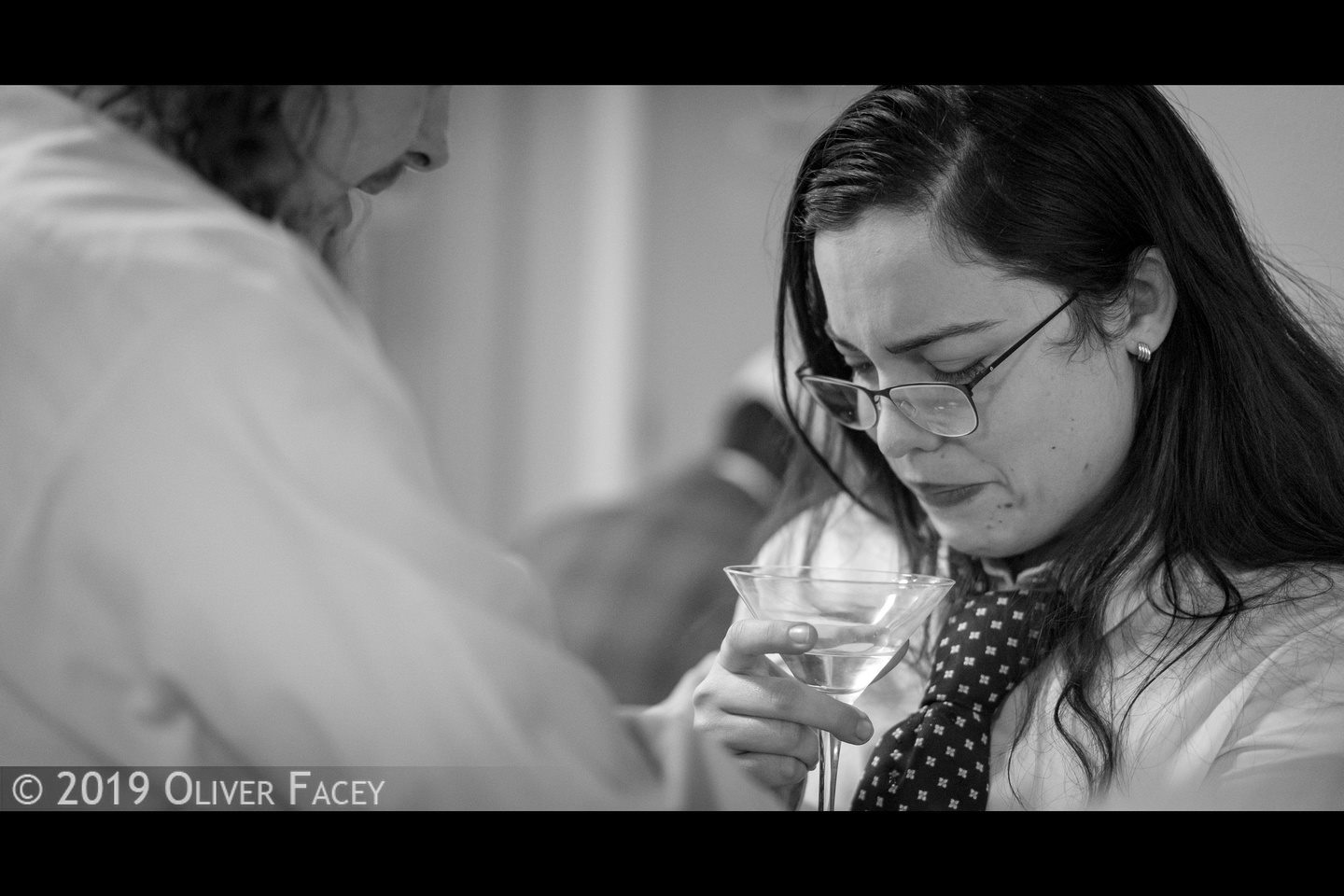 One of the most intense scenes I had in On Location. Photo courtesy of Oliver Facey.